As already mentioned, based on a number of goals and methods of classification, Ukrainian religious studies have been divided into two disciplines - academic and theological. The former, in particular, is characterized by historicity, tolerance, non-confession, objectivity and pluralism. Instead, theological religious studies, based on the belief in the truth of Divine Revelation and the indisputable authority of Scripture, are characterized by apologetic and confessional aspirations, which are accordingly manifested in affirming the truth of a particular religious doctrine and religious belief. Some peculiarity of this division is the fact that according to which the classification principles of foreign religious studies are shifted into the sphere of internal and external specifics of the study of religious phenomenon, as opposed to domestic religious studies, whose study is often based on the ideological and supernatural components of the worldview what religion. 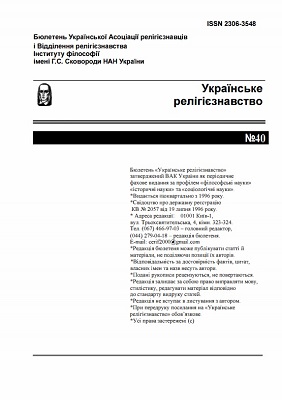