International Society for Krishna Consciousness (ISKCON) in Ukraine faces different kinds of challenges – practical as well as spiritual – since the war in Donbas had been started. The practical challenge deals with taking care of fellows believers from war areas. The spiritual concerns what the community stand for in the conflict. The response on the first one was the foundation of “Ukrainian Vaisnava Refugee Fund” which provides temporal shelter for the refugees and makes the premises in Vaishnava retreat centers ready for the cold season. Concerning the second challenge – ISKCON claims principal and conscious detachment from the war. One could not expect different positions from this religious organization taking to account its theological particularities of the religion. Firstly, Vaishnavism claims a strong division on material and spiritual (transcendental) worlds so that worldly deals including wars treated less important and valuable. Secondly, the Hindu imagination on time implies that Earth is facing the period of degradation (kali yuga) when wars are inevitable and no one can influence it, so there is no point in active participation in them. Thirdly, Vaishnavism does not think about its position on war as on the detachment rather it claims the different type of participation which derives from the understanding of its mission in any conflict which differs from missions of other religious organizations. The mission of ISKCON in the war not to take one or another side but transform the quality of ignorance (tama-guna) into the quality of goodness (sattva-guna) which is reached by transcendental, not worldly methods. Therefore, any ISKCON charity project does not deals with the help one or another side of the conflict directly but strive to be universal and provide help irrespective to war affairs. As a result of this position only two ways of charity was possible for the Krishnaites in a wartime – the project “Food for life. Donbas” and taking care of abandoned cows in the conflict zone.

However, the individual position of devotee could differ from organization’s one. Usually it depends on his or her personal experience or background, especially before coming to Krishna’s consciousness. There are devotees who follow pro-Ukrainian position as well as those who follow pro-Russian, thus Vaishnavas’ attitude to the conflict reflects, in general, the Ukrainian population attitude to it on particular territories. It does not mean that devotees on the Ukrainian territories are all pro-Ukrainian and those who are on the uncontrolled territories are all pro-Russian. Both positions exist on the both sides from the frontline. But because of curtain reasons one or another position is louder on one side from the frontline and almost silent on another.

It could be concluded that Vaishnavas accepted the spiritual challenge successfully on both collective and individual level. As field work has shown ISKCON avoided inner conflicts and schism on the political ground. Furthermore, Ukrainian Vaishnavas have not lost the connection with their fellow believers on the uncontrolled territories. Moreover, they also have not lost the good relationships and connections with Russian fellow believers. Though the intensity of such contacts decreased drastically it is more due to technical reasons connecting with the difficulties on the borders. Regarding ISKCON yatras on the uncontrolled territories of Donbas and in Crimea they are facing difficulties with selflegalization due to strict religious laws.

An Appeal to the Devotees of Ukraine and Russia (n. d.). Retrieved December 15, 2019. Interact website: https://iskconnews.org

Zavhorodniy Y., Smytskyі E. (2017). Hinduism in Ukraine: a general overview and the activities of «The Vaiṣṇava tradition through the ages» international religious studies school. Scriptorium nostrum. 2 (8), 371–385. 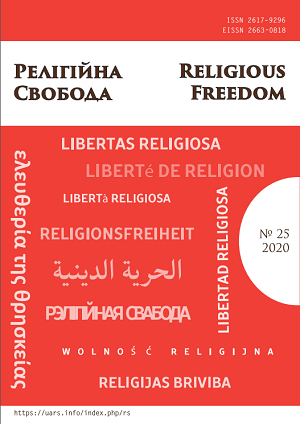