Are freedom of religion or belief and security reconcilable?

This paper presents the OSCE / ODIHR document on "Freedom of Religion or Belief and Security", placing it in the broader context of the debate about securitization of religion.

The author proposes to consider the document in three stages: 1) to put the document in its context; 2) explain the concept of comprehensive security developed by the OSCE; 3) to suggest several considerations regarding its application to freedom of religion or belief.

The political and cultural context is one of the two global processes that today most affect freedom of religion or belief around the world - the nationalization of religion and its securitization. Addressing the potential danger to religion by security, the author criticizes the position of those countries which believe that violence and terrorism, which is becoming more frequent in many parts of the world, is inspired by religious behavior. And so not only in totalitarian or authoritarian states that do not care for human rights, but also in some democratic societies.

Understanding the relationship between religious freedom and security, the author proposes to move away from the traditional, state-oriented concept of security, which focuses primarily on the security of states against military aggression, to one focused on the security of people, their protection and empowerment. It is proposed to treat national, state, and military security as tools for personal and public security, which are the basis of today's security concept.

The document proposes three guiding principles that provide a sound basis for resolving the conflict between the right to religious freedom and the right to security.

1) the principle of teaching that offers educational programs that promote knowledge of different religions and their social manifestations.

But learning to live in a religiously diverse environment is not enough. By itself, it will not create a cohesive and inclusive "common life" so we need

2) the principle of interaction. Without personal involvement in the dialogue, knowledge alone cannot create mutual respect.

Training and interaction are needed

3) an enabling environment that can be built through political and legal measures that create confidence and trust through the recognition of rights, including the right to freedom of religion.

The recommendations are not just for the States. Religious communities, civil society organizations and the media "play an important role in the relationship between freedom of religion or religion and security." They are responsible for creating a cultural and social environment based on responsibility and dedication, the two virtues needed to harmonize freedom and security.

European Consortium of Church and State Research. Securitization of Religious Freedom - Religion and Scope of State Control (proceedings of the conference, Tallinn, 16-18 November 2017, in print with the publisher Comares). 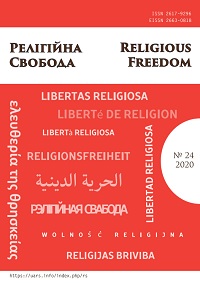