Religious freedom as a universal value

The article substantiates the universal value of religious freedom, based on the fundamental human right to freedom of religion and belief. Referring to the relevant international documents, the author reveals the content of the concept of "religious freedom" and concludes that there are two basic values at the heart of human rights: human dignity and equality. Only a systematic approach to freedom of religion in the human rights complex gives them universal value.

There are two components to freedom of religion (belief): freedom of thought, conscience, and religion; the right to profess one's religion or belief. Religious freedom has both a universal and a private dimension.

Being secular in nature, freedom of religion is especially evident in modern societies, which secularity and inclusivity empowers people to decide for themselves about their religiosity.

The article deals with the restrictions that exist for religious freedom. Often the right to practice one's religion comes into conflict with different rights of other people. The protection of these rights must come from the principles of non-discrimination, neutrality and impartiality, respect for the right to religion, pluralism and tolerance, institutional and personal autonomy, lack of a hierarchy of human rights.

The article argues that religious freedom is a universal value and right in the human rights complex.

Declaration on the Elimination of All Forms of Intolerance and of Discrimination Based on Religion or Belief (1981). Retrieved from: https://www.un.org/en/documents/decl_conv/declarations/relintol.shtml

Universal Declaration of Human Rights (1948). Adopted by the United Nations. Retrieved from: https://www.un.org/en/universal-declaration-human-rights/index.html

Vienna Declaration and Program of Action adopted at the World Conference on Human Rights on June 25, 1993 (1993). Retrieved from: https://www.ohchr.org/Documents/Events/OHCHR20/VDPA_booklet_ru.pdf 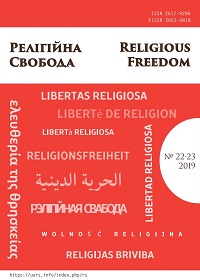