The article is devoted to the study of the relationship between the processes of erosion of the traditional norm vs deviation matrix in the public consciousness and changes in the position of Christian denominations and churches, new tendencies in theological research, canon law, social work, pastoral practice.

The purpose of the work is to characterize the processes of diversification of Christian churches for their attitude towards homosexuality under the pressure of changes in the structure of social deviations and the liberalization of the Christian environment. The author defines the main types of historical stigma of homosexuality; characterizes changes in the public opinion of the population of traditionally Christian countries (based on the modern sociological studies); highlights the main innovations in the social doctrine and practice of various Christian denominations; and identifies the dominant trends in eastern and western Christianity in relation to homosexuality.

It is substantiated that the contradiction between the official doctrine, the conservative position of the church hierarchy, on the one hand, and liberal tendencies in the public opinion of the secular community, on the other hand, are more or less common to all Christian denominations. The most difficult situation related the Roman Catholic Church, whose followers live in Western countries with a high level of tolerance for homosexuality. Under the pressure of changes in legal institutions, public morals and public opinion, the traditional Christian interpretation of homosexuality is filled with new connotations; changes were introduced in canon law, institute of spiritual education, other religious institutions; the church becomes more open to discuss problems that have long been taboo. Church policy and pastoral practice are based on the clear delineation of the concepts of "homosexuality", "acts of homosexuality", "homosexual inclinations", "homosexual intentions", "homosexual temptation", etc.

It has been shown that despite the existing changes in rhetoric, canon law and church practice, the official position of churches is subject to constant critical attacks. Criticism refers not only to the "lack of" acts of homosexuality, the preservation of religious stigma of homosexuality as sin, the condemnation by the church of homosexual behavior, same-sex marriages and gay culture, but also the rooting of patterns of such behavior in monastic and priestly structures. An alternative to the official position of traditional Christian churches is the growing theological movement, which was called "Queer-Theology", which produces its own version of Christian anthropology.

Processes of destroying of traditional structure of deviations in the globalized world, from one side, and processes of post-secularizing - from other, generate contradictory consequences for functioning of religious institutes; the palette of possible attitudes to homosexuality becomes complicated. Overall, the differently directed trends were done distinctly in western and east Christianity. In Catholicism, there are processes of liberalization of Christianity, the search for ways to adapt homosexuals to the religious environment, and in the problem field of Christian anthropology new theological interpretations of gender ethics are proposed. In the flow of Orthodoxy, especially of Russian, the fundamentalization and nationalization of Orthodoxy, the defense of the matrix of traditional values will preserve the religious stigma of homosexuality in the future.

Research results can be drawn on in the courses of religious-studies and sociological disciplines; in research of the problems of social and religious deviation.

Foreseeable assumptions about the development of the research object are finding the best ways to investigate the newest tendencies in attitude of Christian churches toward the social issues of the day; to provide comparative and cross-cultural analysis of processes of diversification of Christian environment. 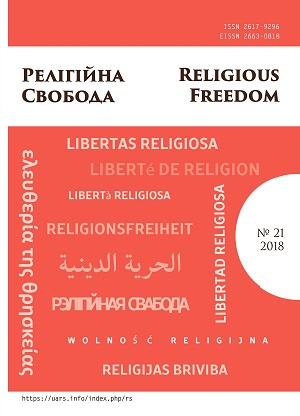