Formation of Pedobaptism in the Third century: Origen, Hippolytus of Rome, Tertullian and Cyprian

Abstract. In the article of Sannikov S. "Formation of Pedobaptism in the Third century: Origen, Hippolytus of Rome, Tertullian and Cyprian the texts of pre-Nicaea Church fathers are analyzed in order to present their conception of water baptism. The works of four prominent theologians of the 3rd century (Origen, Hippolytus of Rome, Tertullian and Cyprian)" are examined particularly. Based on their texts, reflecting the conception of water baptism in various regions of the Roman Empire (Greek East – Alexandria, Latin Africa – Carthage and Rome), the process of formation of children baptism (pedobaptism) is studied in its active stage at that time.

The author demonstrates the factors significantly affecting the substitution of credobaptism (adult baptism by faith) with pedobaptism. The leading role in the emergence of children baptism was held by situations of extreme baptism (illness with the possibility of lethal outcome) when the rigid rules of joining the community could be ignored. The theological background for such actions was the conception of the baptism role as the washing of sins, which was gradually transformed from the forgiveness of sins by faith of the baptized to the conception of this process ex opera operato. Because of the fact that the theology of that time didn’t have the idea of original sin, Origen’s conception of the so called “spot of sin” began to develop for explaining the baptism of innocent infants. 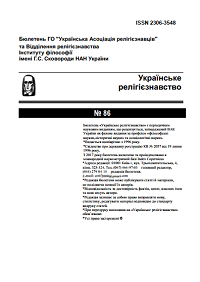