An event as opposed to the everyday life of a believer

The article attempts to comprehend the phenomenon of an event in the religious dimension. An event is considered as a phenomenon characterized by a singularity, that is, an individual character of expression, belongs to the sphere of non everyday life, does not coincide with the usual framework of understanding of the world and does not correspond to empirical factual. The need for a more active philosophical and religious discourse of the correlation between everyday and non everyday life in the realm of religion led to the necessity of address to this problem. Thus, the purpose of the article is to find out the ontological status of the event, the religious context of which manifests itself as an opposition to everyday life and leads to a transformation of the established way of life of the believer.

Everyday being is characterized by features of sacredness, demonstrates the attraction to the transcendent. For this reason, the obvious and justified is the combination of the phenomena of everyday empirical world with the values ​​of another dimension of being. The presence of non everyday in everyday life is evidenced, in particular, by elements of cult practice, since they are an expression of sacral time and space, as well as a way of incarnation of eternal values. The sphere of non everyday life includes the relationship between human and God described in the Gospels, prophecies, revelation, and vision as non everyday manifestations of religious experience.

Event is the opposition of the world of phenomena to beyond the exquisite world of being, the transformation, which leads to the emergence of new orders and structures. Implementation of the event contradicts the previous ideas, therefore meeting the event with standard reality is accompanied by a transformation of everyday life. Establishing the rootedness of an event into being or its transcendental origin allows us to determine the causes of an event.

In a secularized world, human, for the most part, demonstrates his willingness to recognize as significant events, including those in the universe, which correspond to scientific knowledge. This happens even when the fact of the event calls into question the fundamental postulates of science. Given this discovery in science, situations in politics, art, personal life are perceived as large-scale events. Moreover, the moment of meeting with the event can be described, for example, with a poetic language that expresses certain symbols of human existence and appears as a means of objectivizing the event as an unexpected innovation.

Instead, the believer perceives events of a supernatural nature as an interference of the otherworldly reality in the usual way of life. Thus, the reception of religious experience is accompanied by the transformation of the individual's everyday life. The basis of the mystical experience of the religious tradition is the experience of meeting with the Divine, which results in a change in the believer's self-consciousness, transformation of its values, senses and meanings. That is, the awareness of an event that does not belong to an established order implies the prospect of new reality emersion, which contradicts previous notions.

One of the forms of gaining religious experience is the process of conversion, which results in the transformation of the ideological orientation of a person, which enables the knowledge of their own hidden depths of consciousness. Conversion, the acquisition of grace and faith express the sudden or gradual process by which the individual achieves internal harmony, awareness of his righteousness, a sense of happiness, finds support in believing in the reality of what he has discovered in religious experiences.

Badiou, А. (2013). Philosophy and event. Conversations with a brief introduction to the philosophy of Alain Badiou. М.: Institute of Humanitarian Studies.

Whatman, S. V. (2015). Mystical experience and its interpretation: problems of research (on the example of Bengali Vishnuism). Bulletin of the Leningrad State University named after A.S. Pushkin, 2(2), 251–261.

Zizek, S. (2003). Fragile Absolute, or Why it is worth fighting for the Christian heritage. М. : Art magazine.

Ihnatovich, Е. (2004). The event and the modern philosopher. Experience and sensual in the culture of modernity: Philosophical and anthropological aspects, 42–55. 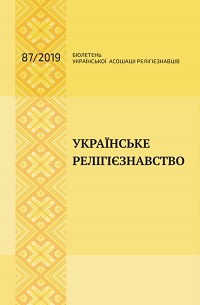