Western Protestantism in the Context of Postmodernity: Theological and Sociological Interpretations of Emerging Church Movement

The purpose of the article is to identify, analyze and summarize the main theological and sociological approaches to the study of the latest trends of the Western Protestant theological inquiry that takes into account the condition of postmodernity, based on the study of the researches of the Emerging church. As a methodological foundation of the research it is employed the interdisciplinary approach, as well as the comparative method, which gives the researcher the opportunity to fully consider the theological and socio-cultural features of Emerging Church. Scientific novelty. As follows from the analysis, there are various theological and sociological interpretations of the church. In particular, the phenomenon of post-modern religiosity is interpreted as a form of protest against the traditional evangelical Protestantism, as the movement of cultural and religious criticism, whose identity is formed by the deconstruction of narratives and discourses of traditional evangelical Christianity, as the autonomous Protestant tradition that applies postmodern forms of knowledge for rethinking of the Christian faith. Conclusions. A new phenomenon of Western Christianity has caused intense debate in the scientific and especially theological environment. Despite the availability of a wide range of interpretations of the new movement, the researchers acknowledge its religious innovative meaning, recognizing the potential of the Emerging Church to actualize the process of transformation of traditional institutions and practices of Protestantism so that it again would be able to enter into dialogue with society in a new socio-cultural situation. 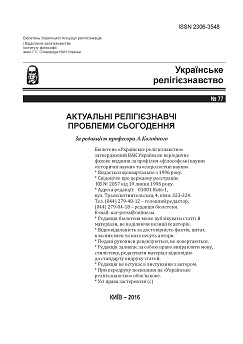